Polycystic Ovary Syndrome (PCOS) is a condition which affects ovarian function. As many as one in ten women will be diagnosed with PCOS. It is one of the leading causes of female fertility problems. It is estimated that twice as many women have polycystic ovaries, but that half of all sufferers experience no symptoms. 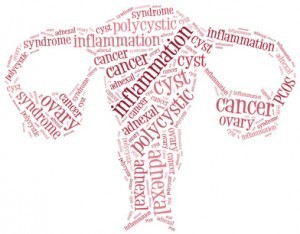 Despite the name, not all women diagnosed with PCOS have ovarian cysts. Two of the following symptoms should be noted before a diagnosis of PCOS:

Other possible symptoms of this condition include:

Women with a family history of PCOS are most at risk of developing this condition. It is believed that genes that leave you predisposed to the condition can be passed down by either parent. Long-term use of certain seizure medication has also been linked with an increased risk.

PCOS is also associated with an increased risk of Type 2 diabetes later in life. Some experts believe that insulin resistance could be to blame for the varied nature of symptoms for this condition. An excess of insulin in the body can lead to weight gain. In the US, around half of all women diagnosed with PCOS are classed as obese.

Little is known about the exact cause of this condition, and as such, opinions vary. Some experts believe the hypothalamus may be to blame for the hormonal imbalance at the heart of this condition.

There is no cure for this condition, but the symptoms of PCOS can be managed. The symptoms of PCOS vary between individuals, and so does the treatment. Most healthcare providers suggest lifestyle changes as the first treatment option. In overweight women, weight loss of just 5% can greatly reduce the symptoms of PCOS. A health diet and regular exercise are an effective form of treatment for women with a Body Mass Index (BMI) of 25 and above.

There are a number of treatment options for the other symptoms of this condition. For irregular periods, the contraceptive pill may be prescribed to regulate hormones. This treatment option can also help to reduce excessive hairiness. Medications can be used to treat many symptoms of PCOS, for example, blood pressure medication can be used to reduce the acne or excessive hair growth associated with this condition.

There are a number of different fertility drugs available, and if the initial medication used is unsuccessful, many women go on to try a different medication. If the use of fertility drugs to regulate ovulation is unsuccessful, In Vitro Fertilization (IVF) is another option available to women suffering from PCOS. The majority of women diagnosed with PCOS are able to conceive with treatment.