How Often Can a Sperm Donor Donate?

And does regular donation come with any risks?
Many men see sperm donation as their dream job. A few minutes in a room to provide a sample, not much in the way of effort; and an easy way to earn a little extra beer money on the side. It seems like a win-win situation. But there could be a few more catches than you might think. First, it’s tough to get accepted as a sperm donor. Most clinics go through a rigorous testing and screening programme with only a select few making it through. Then you could face a busy donation schedule, with in-demand donors asked to donate two to three times a week. We looked at just how much ‘donating’ a regular sperm donor might be asked to do and what impact a busy donation could have on the rest of his life. 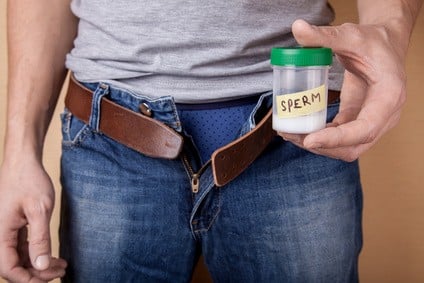 That depends on where you are in the world and the laws governing sperm donation. But in the US, twice a week is not unusual with donors often asked to make a commitment for 6 months or a year. Donations usually need to be made during office hours and donors can make up to a $1000 a month after their sperm has passed certain tests. The process varies around the world, but once you are accepted into a programme, between one and three times a week for around a year is average. Most clinics and some countries limit how many children a single sperm donor can father, so this is unlikely to be a permanent position.

Are there any health risks to donating?

No. Donating sperm is perfectly safe and will not cause any known health problems.

What other issues could arise from being a sperm donor?

Being a sperm donor is opening yourself up to creating new life, which is pretty amazing. You are giving a wonderful gift to couples and single people who, for a variety of reasons, can’t have their own children. Allowing them to start a family. And although for many men this is incredibly satisfying it can have a negative emotional impact too. Knowing you potentially have several children out in the world who you may never meet, can have a strong psychological effect and this needs to be something you are prepared for before you sign up.

If you already have children or are in a committed relationship, then your partner has to be on board with you becoming a sperm donor too. This is an issue that can quickly divide couples so it’s best to be open and upfront about your intentions before you even fill in an application form. Even single donors should consider how the possibility of them having already fathered biological children might impact on future relationships.

Should I become a sperm donor?

There may be some drawbacks to becoming a sperm donor but ultimately you are doing something amazing for the wider community. And there are thousands of families out there who would be incredibly grateful for your generosity. But sperm donation isn’t for everyone. And if the thought of signing up to be a donor at a clinic or sperm bank feels too intense then perhaps you could consider private sperm donation. Using a secure site like coparents.com you can reach out to potential parents who can’t wait to expand their families. Could you help give them the gift they have been searching for?

3 thoughts on “How Often Can a Sperm Donor Donate?”