How Does Smoking Affect Fertility?

We all know that smoking is bad for us but how does it impact our chances of having a baby?

Smoking has long been associated with heart disease, lung disease, cancer, and a whole host of complex and devastating medical problems. And while there may be fewer smokers than in the past, some of us are still struggling to kick the nicotine habit. Most of us know that smoking while pregnant or around children can have serious consequences, but what about while you are trying to conceive? How can smoking impact fertility health for both men and women? And does smoking damage your chances of conception? We take a closer look at the link between smoking and fertility, below. 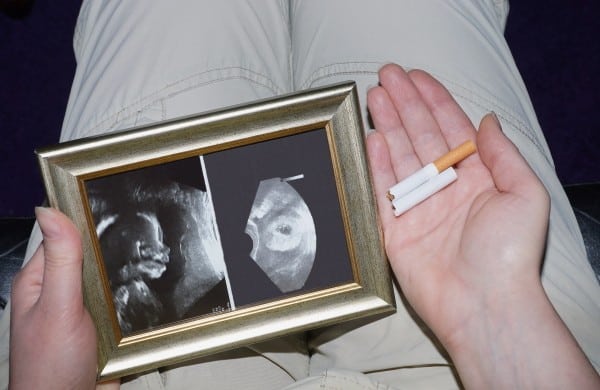 How does smoking impact male fertility?

Cigarettes are packed with toxins. Nicotine. Cyanide. Tar. Arsenic. Many of the ingredients are known poisons, so it’s unsurprising that they have such a devastating effect on our bodies. For men, the damage to the sperm caused by smoking is wide-ranging. Smoking impacts both size, concentration, and speed of sperm. It also increases the number of sperm with damaged DNA. Research has shown that smoking impacts:

This is how well a sperm swims. If a sperm cell can’t propel itself properly, it’s highly unlikely to ever reach the egg.

This is how many sperm are present in a sample. Men who smoke can expect to have 23% less concentration of sperm compared to non-smokers.

This relates to the shape of sperm cells. Sperm that are oddly sized or misformed may not be able to swim properly or gain access to the egg – reducing the chances of fertilization.

Research has found that smokers are more likely to produce sperm with fractured DNA. Sperm with damaged DNA can cause a range of problems from genetic abnormalities to increased rates of miscarriage.

Men who have smoked for longer, and who smoke more often, exhibit more damage to their sperm than those who have smoked less. This indicates there is a cumulative effect on male fertility damage caused by smoking. Smoking has also been linked to abnormal hormone levels in men and decreased IVF success. Smoking alone is unlikely to cause complete infertility, but it can push those who are already at risk over the line and make it much more difficult for healthy conception to occur.

How does smoking impact female fertility?

Smoking can have an equally painful effect on female fertility and can reduce the chances of a successful pregnancy. It can also impact the long-term health of any child who is born to a smoker. This means that it is a good idea for a woman to quit smoking before she starts trying to conceive. Not only can this improve overall health and fertility, but smoking could also cut down the chances of conception by half. Here are some of the ways that smoking impacts female fertility:

Smoking has been linked to problems with the fallopian tubes, including blockages that prevent the egg and sperm from coming together and an increased risk of ectopic pregnancy.

Research has linked smoking to blocking the body’s immune system in fighting HPV – an infection that can increase the chances of developing cervical cancer. Cervical cancer can have a serious impact on fertility.

Egg damage in the ovaries has been directly linked to smoking. Damaged eggs may not be able to be fertilized or could increase the possibility of genetic abnormalities in a growing fetus.

Miscarriage rates are higher in smokers. This is thought to be due to a combination of reasons, including unfavorable womb conditions, cervical abnormalities, and damaged eggs.

Smoking can contribute to issues that lead to infertility but smoking alone is unlikely to decrease a women’s fertility to zero. However, smoking may mean that it takes longer to conceive and that a woman’s biological fertility window is much shorter. Smoking can also increase the likelihood of a baby being born with birth defects. Smoking can even impact the long-term fertility health of your unborn child. There is evidence to suggest that smoking can impact the development of a baby girl’s ovaries. Essentially to protect both your health and that of your children, it’s important to stop smoking before you try to conceive.

What about second-hand smoke?

Even if you are not smoking, being around a partner, friend, or even co-worker who smokes can have a detrimental effect on your fertility. Researchers have found that women who are exposed to passive smoke but who do not smoke themselves experience a reduction in fertility. While those who smoke and are also exposed to passive smoke have lower fertility rates than those women who only smoke themselves. These startling findings mean that, even if you are not trying to get pregnant, you could be impacting other peoples’ fertility simply by smoking around them.

Many cigarette smokers have switched over to vaping in recent years, believing this is a healthier and less harmful way to feed their nicotine addiction. But what do we know about the link between vaping and fertility? Although vaping does not contain some of the substances found in regular tobacco, it still contains powerful carcinogens and irritants at a dangerous level. There has only been limited research done on vaping and fertility, but early signs do not look positive. A British team found that flavored vape juice negatively affected fertility, killing off testicular cells and reducing sperm motility. Vaping has been banned in some places around the world and linked to a number of deaths. The best advice is for men and women to stay away from all nicotine products while trying to conceive.

Are you getting ready to try for a baby? Are you looking for a healthy sperm donor or committed co-parent to support you on your journey? Explore the forums at coparents.com to find the people you need to make your dream of a bigger family a reality.