Fertility can be affected by a lot of factors, but many men will be thrilled to hear that drinking and having a steak could actually improve their ability to get a lady pregnant. At the 70th Annual Meeting of the American Society for Reproductive Medicine, researchers reported on just what men need to be doing, and not doing, to get their sperm really moving. So, healthy sperm = Alcohol + Meat? 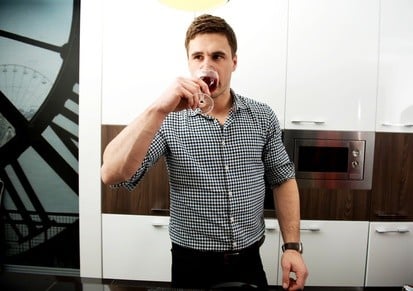 Alcohol is in, Coffee is out

Based on research that took survey data from several hundred men seeking fertility treatment, moderate drinking is good for fertility, but caffeine is not. The average age of the men in the study was 35 and they were asked about all kinds of lifestyle habits as well as their sexual health. About three-quarters of the men were regular drinkers, and these men reported better sexual function. The men who never drank were more likely to report issues with sexual dysfunction.

Another, similar study asked men involved in in vitro fertilization (IVF) treatments about their drinking habits, including caffeinated beverages. The researchers compared those answers to the success or lack of success in the IVF treatments. The men with the highest consumption of caffeine were only half as likely as the men with the lowest consumption to have a successful IVF pregnancy. Caffeine may get the man up and going in the morning, but it is clearly not good for his sperm.

Sperm Alcohol Meat… Go Ahead and Have a Steak

Another study reported on at the meeting investigated the role of diet in a man’s fertility and found that meat eaters are more fertile than vegetarians. The researchers conducted sperm analyses on over 400 non-vegetarians, 26 vegetarians, and four vegans. The concentration of sperm in the samples from the vegetarian and vegan men was significantly lower than in the men who ate meat regularly. The mobility, or ability of the sperm to swim, was also much better for the meat eaters. However, it is important to note that the veggie eaters did still fall in the fertile range. Their sperm just wasn’t of the same quality.

What Else Makes for Strong, Numerous Sperm?

Stronger sperm, alcohol + meat… The recent research reported on fertility in men may be good news for many. A lot of men will be happy to hear that eating meat and drinking is good for their sperm counts. Of course, giving up caffeine may be difficult for some. The better news is that there are many lifestyle factors that impact male fertility, and if giving up caffeine is too hard, there are other changes that can make up for it.

Obesity negatively effects sperm count, so men looking to improve fertility should manage their weight. A healthy diet and plenty of exercise can help with this, and may also help contribute to improved fertility. Stress is also bad for fertility, as it can impair sexual function and mess with the hormones that are needed to produce sperm. Smoking is bad for sperm too, not to mention overall health, so it should be avoided. Smokers looking to conceive need to quit. Wearing tight underwear and sitting all day are sperm killers because they raise the temperature down there. Men should where looser underwear and pants and get up from the desk for frequent breaks and to let air circulate.

Human fertility is a complicated thing and for all those men looking to conceive, there are a lot of factors to consider. Take it all into account if you are struggling with fertility, but also see your doctor. The guidance of a health professional may be your most important tool in conceiving.