For many couples, the desire to start a family is a natural next step in their relationship. But choosing to have children within a same-sex couple can come with its own unique set of challenges and frustrations. Which method will you choose to expand your family? Is it possible to have your own biological children? Will you face stigma and prejudice? These are all common questions for same-sex parents. But the rewards of creating a happy, healthy, and growing family are huge. And by understanding the options open to same-sex parents you can prepare yourself for the complexities and the joys of welcoming a new member to your family. We have explored some of the key issues facing homoparental families, below. 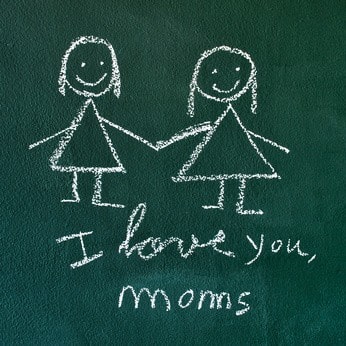 What is a homoparental family?

What are the options for same-sex couples?

For women and men in a same-sex relationship, there are a number of options for expanding their family, either with a child that is biologically related to one partner or a by welcoming a child without a family of their own. These are the key options open to lesbian and gay couples who want to have a child of their own:

This method is the most common method of conception for women in a same-sex relationship. Donor insemination is when donated sperm is used in order that one of the women within the relationship can conceive and become pregnant. There are a number of ways this can be arranged. The donor may be a friend, or a private donor recommended by a fertility clinic. It could also be a private donor that a couple reach out to online, using a trusted resource like coparents.com. The insemination can be done at home or in a fertility clinic, although a clinic can provide the added security of rigorous health checks. For lesbian couples with barriers to fertility, donor sperm can also be used as part of IVF treatment.

A couple may come to an arrangement with a single individual or another same-sex couple to have a child together. Pregnancy may still happen via donor insemination, but the key difference is that the co-parents opt to remain an active and regular part of their child’s life. For any co-parenting setup, it is vital that all parties agree to financial and access terms early in the process and advice from a family lawyer should be sought.

For many gay couples, surrogacy is the best way for them to have a baby where the child is biologically related to one partner. A surrogate mother will carry the child (often conceived via donor insemination from one of the men who make up the couple) for the duration of the pregnancy. However, this can be an expensive option and laws on the rights of surrogate parents and the associated fees vary from country to country. For example, in the UK and Canada, surrogacy agreements have no legal weight and the surrogate mother can change her mind at any stage in the process. Therefore, it’s important to understand how surrogacy laws work in your country or state.

Adoption or fostering is an amazing way for same-sex couples to offer a loving home to a child or children who don’t have their own family. Adoption can be a long process and couples should expect to face detailed background and suitability checks before waiting to be paired with a child. Many same-sex couples fear they will be viewed with prejudice by agencies or local government. But this type of discrimination has largely been erased from the adoption and fostering process in much of the world.

Will we face stigma as a homoparental family?

Unfortunately, we live in a world where homophobia still exists, and many same-sex couples will face prejudice at some stage in their lives. It’s also not uncommon for children of homoparental families to face curiosity or stigma from other children at school. However, it’s important to recognise that this picture is changing for the better. In the last decade, attitudes towards same-sex couples and homoparental families have shifted positively, and, in many countries, laws protect individuals and families against homophobic discrimination. No one can guarantee you won’t face prejudice as a homoparental family, but things are getting easier as this family type becomes more visible.

What are the laws around homoparental families?

This is a complex question and the law is different depending on where you are in the world and (sometimes) depending on how a child is conceived. The good news is that in many geographies, including, the UK, Canada, Spain and many parts of the US, same-sex parents are offered the same parental rights as their heterosexual counterparts. But this can change depending on the marital status of the same-sex couple and the presence of a biological parent. The best advice is to carry out detailed research on local family law before moving ahead with your plans.

Can we adopt or foster children as a homoparental family?

Absolutely! For many same-sex families, having their own biological children isn’t as important as providing a child with a good home. In many parts of the world, discrimination against same-sex parents who wish to adopt is illegal and stigma around same-sex parents has lessened considerably. You should approach your local government agency or a private adoption agency for more information on fostering and adoption.

Can homoparental families provide everything a child needs?

How can I find out more about starting a homoparental family?

Coparents.com offers a wealth of resources for same-sex parents who are looking to grow their family. From helpful articles to legislation, including a detailed overview of sperm donor and co-parenting laws in the US, UK, Australia, Canada, New Zealand and South Africa. You can also contact your local fertility clinic or reach out to families who have been on the same journey through online forums and communities. You are about to embark on one of the most exciting, challenging, and rewarding phases of your life. Welcome to parenthood!

3 thoughts on “Creating a Homoparental Family”