Birth of the First Baby with Three Parents’ DNA

Perhaps you’ve seen it in the news; the first baby boy conceived with the DNA of three parents was born on 6 April 2016. Risky and controversial for some, a revolutionary medical event for others, this technique has only been legally approved in the UK and nowhere else in the world.

Leigh Syndrome, a genetic disease that can be passed on from a mother to her child

Before giving birth to their little boy, the Jordanian couple involved in this groundbreaking procedure had been trying to have a child by conventional means for almost twenty years. They finally managed to get pregnant after a decade of failed attempts, but this was sadly the first of four miscarriages. The couple eventually gave birth to a little girl in 2005. Unfortunately, this did not mark the end of their problems, as their daughter died at the age of 6. The reason? She was carrying a genetic mutation, a disease that can affect the nervous system and can sometimes prove fatal.

The couple discovered that the genetic mutation was a result of the mother having something called Leigh Syndrome. Their second child suffered from the same disease and passed away from its effects after only 8 months. 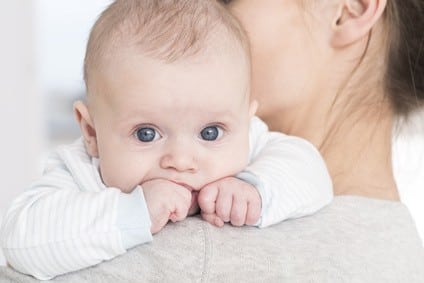 Despite being healthy herself, the mother carries the genes of this rare inherited disorder, and can pass it on to her children. The effects of the disease usually appear in the first year after birth, are often severe and can cause irreparable damage to the child’s brain, muscles and nerves. Children carrying the disease can generally expect to live six or seven years.

The gene responsible for the disease was found in the woman’s DNA, specifically in her mitochondria, whose main role is to provide energy to run the cell. The researchers discovered that about a quarter of the mother’s mitochondria were carrying the Leigh disease mutation.

The couple decided to seek the help of Doctor John Zang and his team at New Hope Fertility Center in New York City.

Via a new technique involving the use of three people’s DNA, Zhang found a way of conceiving a baby whilst avoiding mitochondrial mutation.

In order to enable the mother to have healthy children, Zhang and his colleagues performed what is called a “spindle nuclear transfer », a mitochondrial transfer procedure conducted to ensure that the genetic disease doesn’t pass on to the child.

In short, Doctor Zhang’s three parents procedure involved the substitution of the mother’s mitochondria with those of a donor. He began by removing the nucleus from one of the mother’s eggs and transferring it into a healthy donor’s egg, which had had its own nucleus removed. The doctor then fertilized the egg with the husband’s sperm. The resulting embryo had DNA from three different people:  the mother, the donor and the father.

Only one out of the five embryos created with this technique developed successfully. As with in vitro fertilization (IVF), the embryo was then implanted into the prospective mother’s womb. Nine months later, their baby boy was born in good health.

To avoid the child developing the disease and transmitting any inherited mitochondrial DNA, the fertility specialists used a male embryo. While the team was screening the baby to make sure that he was healthy, they found that less than 1% of his mitochondria were carrying the disease. This was good news for the family, as the rate of mutated mitochondria that is considered dangerous is usually much higher (around 18 per cent).

Where is this technique legal?

This method is not permitted in the USA. Zhang and his team were therefore obliged to travel to Mexico, where legislation is more flexible, in order to perform it. In 2015, the UK was the first – and remains the only – country in the world to approve this controversial procedure. Although a fertility technique such as this might raise ethical questions, it also represents a beacon of hope for many people carrying a genetic disease who want to become parents.