Today, whether they are single or in a relationship, women tend to have their first child later in life than they did a few decades ago. Many of them try to conceive after 40 for a variety of personal reasons. However, conception becomes more difficult as women get older. After 40 or so, perimenopause, the phase leading up to menopause and, therefore, to the end of a woman’s reproductive years, can make becoming pregnant harder. 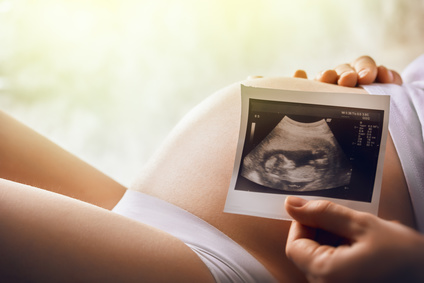 Perimenopause, also called menopause transition, is the phase that occurs before menopause. During this transition, the body is preparing for menopause and the ovaries are beginning to produce less estrogen. Most women experience perimenopause during their forties, but it may also start in their thirties, or even before.This phase stops when menopause starts, usually several years after the first symptoms. Perimenopause ends when a woman experiences a year without having periods and when her ovaries stop producing eggs.On average, perimenopause can last for 4 years. However, some women experience this phase for only a few months, while for others it can last for up to 10 years.During the menopause transition, women’s menstrual cycles become irregular which makes conception harder. Nonetheless, a woman can still become pregnant during perimenopause, as ovulation may continue.

What are the symptoms of perimenopause?

Why have a child during perimenopause?

Raising a child requires money and time. Women who choose to become pregnant during perimenopause (which is most likely to occur in their forties), may do so because they did not have the time to have a child in their younger years, for instance, because they were very busy with their career. This could also be explained by the fact they were waiting to be more financially secure in order to ensure the welfare of their child. Having a baby in your forties has advantages. For instance, women often feel more confident and their financial situation may be more stable.

Can you get pregnant during perimenopause?

Every woman is born with a limited number of eggs. As they get older, their reserve of eggs declines. Those that remain are aging, which increases the chances of chromosomal abnormalities. Therefore, as a woman’s fertility drops with age, so do her chances of becoming pregnant. This is even more the case when perimenopause symptoms appear.In comparison to 30-year-old women who have a 20% chance of getting pregnant in any given month, the odds of a woman over 40 having a baby plummet rapidly due to a reduction in the quantity of her eggs.During perimenopause, hot flashes or skipped periods can last for a few months and then disappear, as the cycle returns roughly to normal.Therefore, a woman who is perimenopausal can still become pregnant until the moment her ovulation stops. However, things such as the hormonal fluctuations that cause irregular periods can make conception difficult.

How to become pregnant during perimenopause?

A great way to improve your chances of conceiving is to track the time of your ovulation. During perimenopause a woman’s periods might become sporadic. As a result, pinpointing exactly when ovulation occurs – and therefore when she is at her most fertile – can easily become more complicated. Another problem is that aging eggs reduce the odds of conception.A woman who wishes to have a baby should not only look at her menstrual cycle to determine when she is the most fertile, she should also pay attention to any signs of ovulation, such as white vaginal discharge or breast tenderness.It’s recommended that moms-to-be who experience perimenopause should consult their medical practitioner beforehand in order to help them conceive. This is also essential to ensuring their good health all throughout the pregnancy, as well as that of their future baby. Paying attention to their lifestyle, for instance, as well as maintaining a varied and balanced diet and keeping fit by doing exercises is also important.

What are the risks of becoming pregnant during perimenopause?

As women age, medical risks during pregnancy get higher. For example, expecting mothers over the age of 35 are two to three times more likely to develop gestational diabetes than younger women. There is also an increased chance of developing conditions such as high blood pressure and placental issues (placenta previa, for example).Additionally, as her uterus might not function as well as a younger woman when it comes to delivering the baby, a 40+ expectant mother is much more likely to give birth via caesarian-section, even though many women still deliver their baby naturally. Older women are also more at risk of having an ectopic pregnancy, a complication in which the embryo implants outside the uterus.Although miscarriage is rather common at any age, its likelihood increases with age. Between the ages of 40 and 44, the risk is 33 percent and at 45, one in two pregnancies ends in miscarriage.

Are babies at risk while trying to become pregnant during perimenopause?

When women get older, there is an increased chance of chromosomal abnormalities in their aging eggs. In addition, babies conceived by older mothers are at greater risk of being born with Down syndrome. More specifically, the rate increases from about 1 in 1,200 at age 25, to 1 in 100 at age 40 and by 49, the risk drops to 1 in 10, according to the National Down Syndrome Society. It’s recommended therefore that those planning a pregnancy after 40 undergo genetic tests beforehand.To avoid passing on chromosomal disorders to their baby, many women over 40 choose to become pregnant via egg donation.