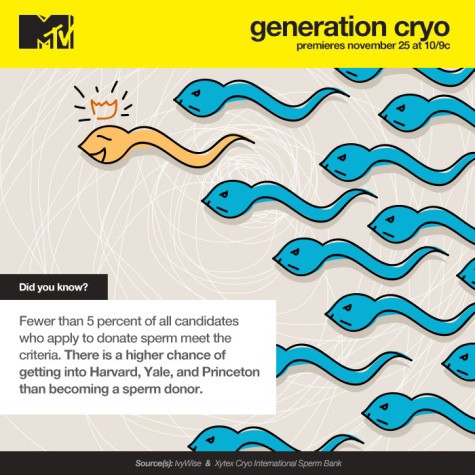 The MTV series Generation Cryo about the life of a woman in America who, on attempting to find her sperm donor father has found she also has 15 half siblings, has divided audiences as to its credibility. If you needed a programme to stir up raw emotions and controversial opinions, leave you open mouthed in disbelief but at the same time glued to the TV set then Generation Cryo, the new documentary series focusing on sperm donation premiered on MTV certainly pulled no punches.

Heart-warming and shocking in turns, this series will no doubt divide audiences on many different issues concerning sperm donation, but perhaps the most wonderful thing is it has brought the whole subject out of the cupboard and in a way that is accessible to all audiences. As much as it has taken as its subject a situation which is very rare in real life – and could therefore be seen as sensationalising in a bad way – it has got people talking. That has got to be good hasn’t it?

Maybe, but there are many who believe that the programme has given a very false view of sperm donation generally for the sake of providing a little cheap titillation and sensation. It is ok to bring the issues of sperm donation to the public eye but only if the focus of the subject matter is something people will find in everyday life. It is highly unlikely that a sperm donor could donate to so many women as registered sperm donor clinics have strict guidelines to limit the number of offspring a donor can father in any one community.

Some commentators also believe rather than the programme furthering the science of sperm donation it is putting it in a bad light in the eyes of the general public. By suggesting that one man can father children at such a high volume and anonymously makes the whole process look like a factory line rather than a unique and regulated system.

When trying to track down her sperm donor father, Breeana, who is at the centre of the series also finds (to her joy!) that she also has 15 other half-siblings. The series is so powerful because she talks directly through her online video and is able to use the medium to how express how she is feeling in real time, and the various concepts she is taking into consideration. It also takes into account relevant controversial issues (in one episode Breeana interviews a sperm donor to try to find out why he decided to donate). So this series won’t be ignored. So long as it brings people to the table to talk about facts, discuss different ideals concepts and regulations, and if it continues to get people to talk it has to be good. Doesn’t it?

45 thoughts on “Are MTV Sensationalising the Sperm Donor Process?”

Leave a Reply to chris