According to the William Institute, about 3 million LGBT individuals have had a child and 6 million people have an LGBT parent in the US. However, although gay characters have been gradually more represented on TV over the past few decades, gay parents and gay married couples remain rare on screen (same-sex marriage is legal across the country since 2015).

Movies and series that portray same-sex parents often touch on the numerous obstacles, as well as the many frustrations and complications, that gay and lesbian parents have to endure in order to have a baby. Discover our selection of the best LGBT parents on TV.

These two characters probably rank amongst the most famous gay dads on TV. Over the course of eight seasons, Cameron and Mitchell adopt their daughter Lily, look for a surrogate to have a second child (but after too many unsuccessful attempts, make the decision to move on and give up on their project) and finally get married in season 5.

These two emblematic characters of “Grey’s Anatomy” – Callie and Arizona – get married and have a daughter called Sofia in season 7. Although they finally separate, their couple remains one of the most memorable of the show. Additionally, what with Callie being bisexual, Grey’s Anatomy portrays a form of sexual orientation that is rarely shown on mainstream TV. 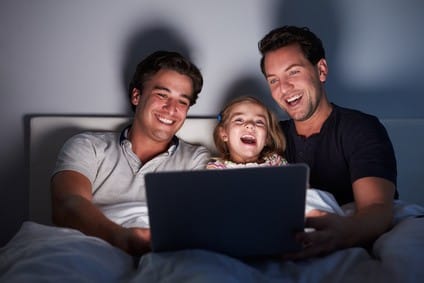 The first episode of “Friends” was aired in 1994, which is more than 20 years ago! This super cult show was one of the pioneers when it came to challenging stereotypes and fostering debate. Some of the topics tackled by the show’s writers include: co-parenting (when Ross and Rachel have a baby without being in a relationship), sperm donation (when Monica and Chandler are trying to have a baby), surrogacy (when Phoebe carries the babies of her brother), as well as gay parenting with Susan and Carol, the latter being Ross’ ex-wife and the mother of his son, Ben.

4. David and Keith – Six Feet Under

Created by Alan Ball, “Six Feet Under” – which won Best Television Drama Series at the Golden Globes 2001 – portrays a gay couple named David and Keith. After trying to have a child via surrogacy, the couple eventually adopts two little boys in season 5.

Through the six seasons of “The L World,” we follow Bette and Tina in their quest to have a baby via artificial insemination and then raising their daughter (Angelica). In season 7, Bette and Tina try to have another child, this time via surrogacy.

6. Bryan and David – The New Normal

In this sitcom created by Ryan Murphy, a young gay couple, Bryan and David, opt to have a child through surrogacy. In an effort to develop a closer bond with them, their surrogate (Goldie) and her nine-year-old daughter make the decision to move in.

Rob and Lee are the gay couple who join Bree, Susan, Gaby, and Lynette on Wisteria Lane in Season 4. In season 7, they finally adopt a little girl called Jenny.

8. Stef and Lena – The Fosters

In this American show broadcast on ABC Family, Stef and Lena are a lesbian couple raising their biological, adopted and foster children. “The Fosters” won the Outstanding Drama Series at the 25th Annual GLAAD Media Awards.

9. Lindsay and Melanie – Queer as Folk

Adapted from the British show of the same name, “Queer as Folk” portrays several gay characters and their relatives living in Pittsburgh. A lesbian couple – Lindsay and Melanie – try to have a child twice through sperm donation by private arrangement. Another couple, Michael and Ben, adopt a troubled teenager.

10. Kevin and Scotty – Brothers and Sisters

In the fourth season of “Brothers and Sisters”, Kevin and Scotty decide to have a child via surrogacy. Despite finally becoming pregnant after a long time of trying, the surrogate mother suddenly informs the couple that she has lost the child. Kevin and Scotty eventually make the decision to move on by adopting a little girl. However, they come to realize that their surrogate lied to them and that they are in fact the parents of a second child.

3 thoughts on “10 Best Lesbian and Gay Parents on TV”

Leave a Reply to Greys